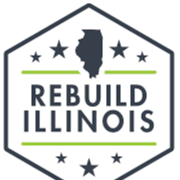 Several Illinois communities shared in $106 million in capital grants to revitalize 50 commercial corridors and main streets. Among them was the City of Rockford, which will receive $2.1 million to reconstruct Madison Street.

Fehr Graham helped the City apply for the Rebuild Illinois grant to revitalize a main thoroughfare in the River District. Our team designed improvements for Madison Street, which will be fully reconstructed with new water lines, underground utilities and a bicycle lane. We also designed a path for pedestrians. The project is focused on reconstructing Madison Street from East State Street to Prairie Street, replacing 100-year-old-plus water main, relocating other utilities such as storm sewer and overhead utilities, improving the streetscape and sidewalks and bicycle lanes. With funding, the project is expected to be completed in 2023.

In addition to the $106 million in state funding announced by Illinois Gov. JB Pritzker and the Department of Commerce and Economic Opportunity (DCEO), projects will get an additional $109 million in matching grant funds, for a total investment of $215 million. The historic Rebuild Illinois Downtowns and Main Streets Capital program represents the largest-ever Rebuild Illinois investment focused on community revitalization.

"With that upgraded infrastructure comes economic opportunity: More jobs, more business growth and more money pouring into the communities that need it most — and that's what Rebuild Illinois is all about," Pritzker said in a news release.

Grants awarded through the program are for commercial centers or downtown areas and include a variety of projects, such as the restoration of historic buildings, parking and street improvements, construction or improvement of outdoor venues or plazas for public use, sustainability upgrades, structural repairs and other projects benefitting the larger community. Grants range from $398,552 to $3 million.

"Because of Rebuild Downtowns and Main Streets, Rockford is expected to receive over $5 million for our downtown area," said State Rep. Maurice West (D-Rockford). "This means more opportunities for building trades on the projects and ultimately workers in the businesses. Thank you, Gov. Pritzker, for putting Rockford to work."